In this post we will introduce multivariate adaptive regression splines model (MARS) using python. This is a regression model that can be seen as a non-parametric extension of the standard linear model.

MARS builds a model of the from

where $x$ is a sample vector, $B_i$ is a function from a set of basis functions (later called terms) and $c_i$ the associated coefficient.

The basis functions are one of the following: 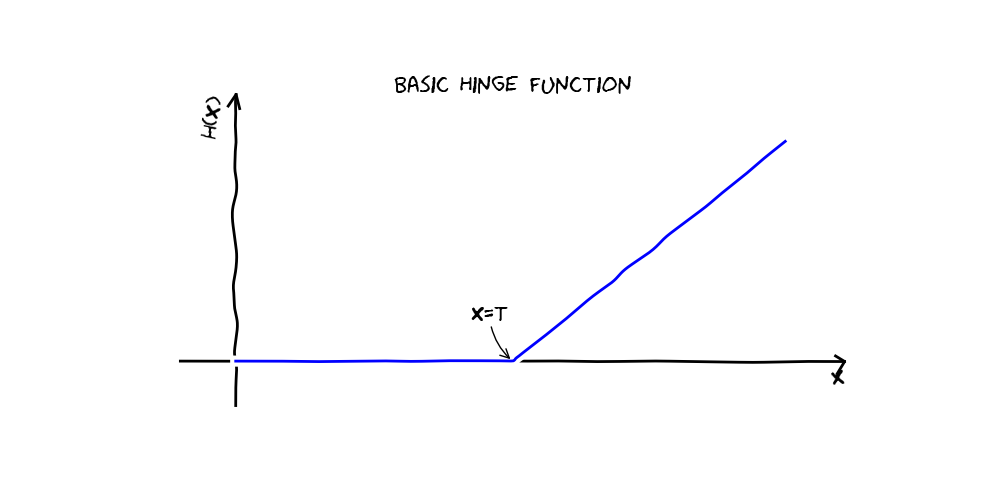 How do we learn?

The MARS algorithm does learning in two steps. First we overgenerate a set of basis functions in the so called “forward pass”. The forward pass searches for terms that locally minimize squared error loss on the training set. Here we just add basis functions in a greedy way one after another. In The second step, the “pruning pass”, we remove unnecessary basis functions. The pruning pass uses generalized cross validation (GCV) to compare the performance of model subsets in order to choose the best subset: lower values of GCV are better. The GCV is a form of regularization: it trades off goodness-of-fit against model complexity.

The formula for the GCV is $$GCV = \frac{RSS}{(N (1 - EffectiveNumberOfParameters / N)^2)}$$ where RSS is the residual sum-of-squares measured on the training data and N is the number of trainingsamples.

The EffectiveNumberOfParameters is defined in the MARS context as $$EffectiveNumberOfParameters = n_{terms} + penalty \frac{(n_{terms} - 1 )}{2}.$$ The GCV formula penalizes the addition of terms. Thus the formula adjusts the training RSS to take into account the flexibility of the model. We penalize flexibility because models that are too flexible will model the specific realization of noise in the data instead of just the systematic structure of the data.

A working example in python

Now we will look at a working example in python. For this we use the implementation provided by the pyearth package. We will use the data set from the “House Prices: Advanced Regression Techniques” challenge on kaggle. The data set contains 79 explanatory variables describing (almost) every aspect of residential homes in Ames, Iowa, this competition challenges you to predict the final price of each home.

We start with some basic data processing. We’re not going to do anything fancy here:

The pyearth MARS model offers some parameters to tune. I list the most important ones and how they influence the model.

Now we run MARS and look at the performance.

This gives us a rooted mean squared logarithmic error of 0.126. Looks not so bad. This is definitely a good start.

We can use the MARS model like decision trees for boosting. Scikit-learn offers a convenient way to do this with the AdaBoostRegressor. Just plug it in there and here we go:

All this features make the MARS model a very handy tool in your machine learning toolbox.

Go out and use it!